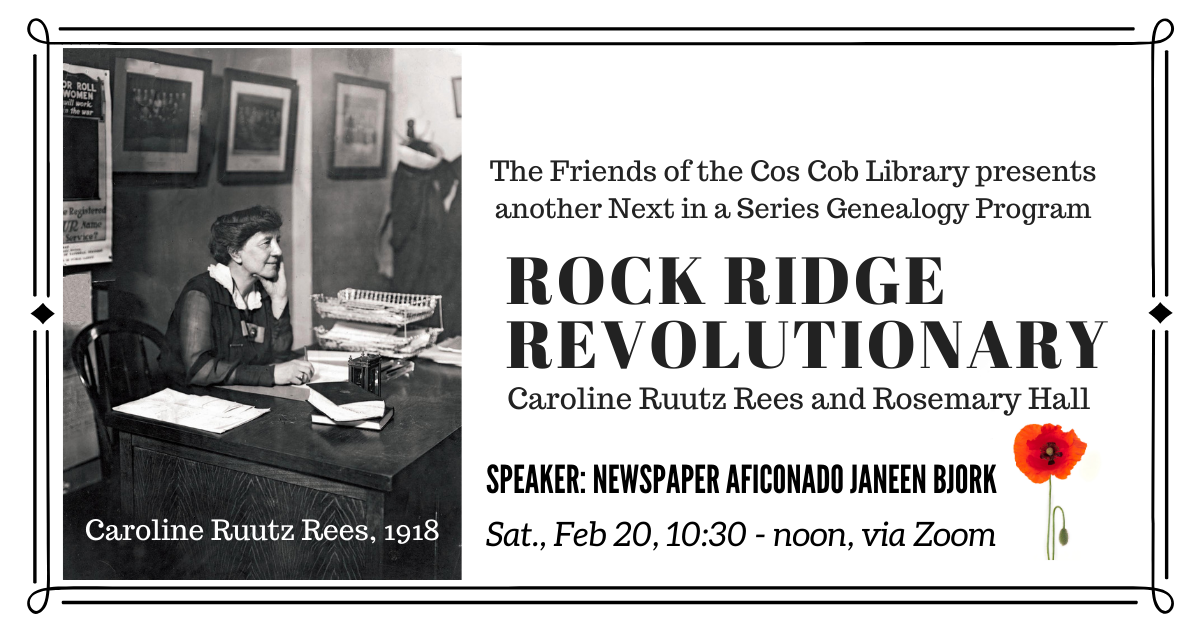 Register for the Zoom join link and password.
The Friends of the Cos Cob Library are pleased to welcome back Genealogy teacher Janeen Bjork, who will present a free program at 10:30 a.m. on Saturday, February 20th, entitled “Rock Ridge Revolutionary: Caroline Ruutz-Rees and Rosemary Hall.” The presentation will take place from 10:30 until noon via Zoom.
An unusual surname and a storied life make Caroline Ruutz-Rees (1865 – 1954) an ideal case study for a program on best practices for conducting online newspaper research.
Caroline Ruutz-Rees broke ground in myriad realms. She broke ground in Greenwich as the headmistress (1890 - 1936) of Rosemary Hall, a progressive preparatory school for girls that emphasized academic excellence, athletics, and student governance. Under her tutelage, Rosemary Hall transcended the girls’ finishing school and rivaled the boys’ prep schools of the time. In addition to her academic career, Ruutz-Rees held leadership roles both locally and nationally, as an activist for women’s suffrage, in the war effort during World War I, and in Democratic party politics. A house in Port Chester, owned by Rosemary Hall, served as the headquarters of the Greenwich Committee for Maternal Health, during the 1930s when birth control was illegal in Connecticut. Although she never married, she adopted and raised two children.
The program will demonstrate the methodology used to trace the life of Caroline Ruutz-Rees and the history of the school she co-founded through online newspaper resources.
TV researcher and Genealogy teacher Janeen Bjork has been obsessed with the information historical newspapers contain ever since she found a story about the 1894 murder of her great-great-grandfather, William Strutz, in a Syracuse, NY newspaper. At last count, she had found over 135 different accounts of the tragedy, despite the murderer's or the victim's names being misspelled or misread by OCR (optical character recognition, the technology that allows newspapers to be indexed and searched online) in the majority of the newspapers. Through her research on Caroline Ruutz-Rees, Ms. Bjork will share her search methodology, as well as examples that illustrate how anyone (you!) can find and preserve family items from online newspapers.
The Friends of the Cos Cob Library have sponsored the “Next in a Series Genealogy Programs” for eighteen years.
This program is free and open to the public.