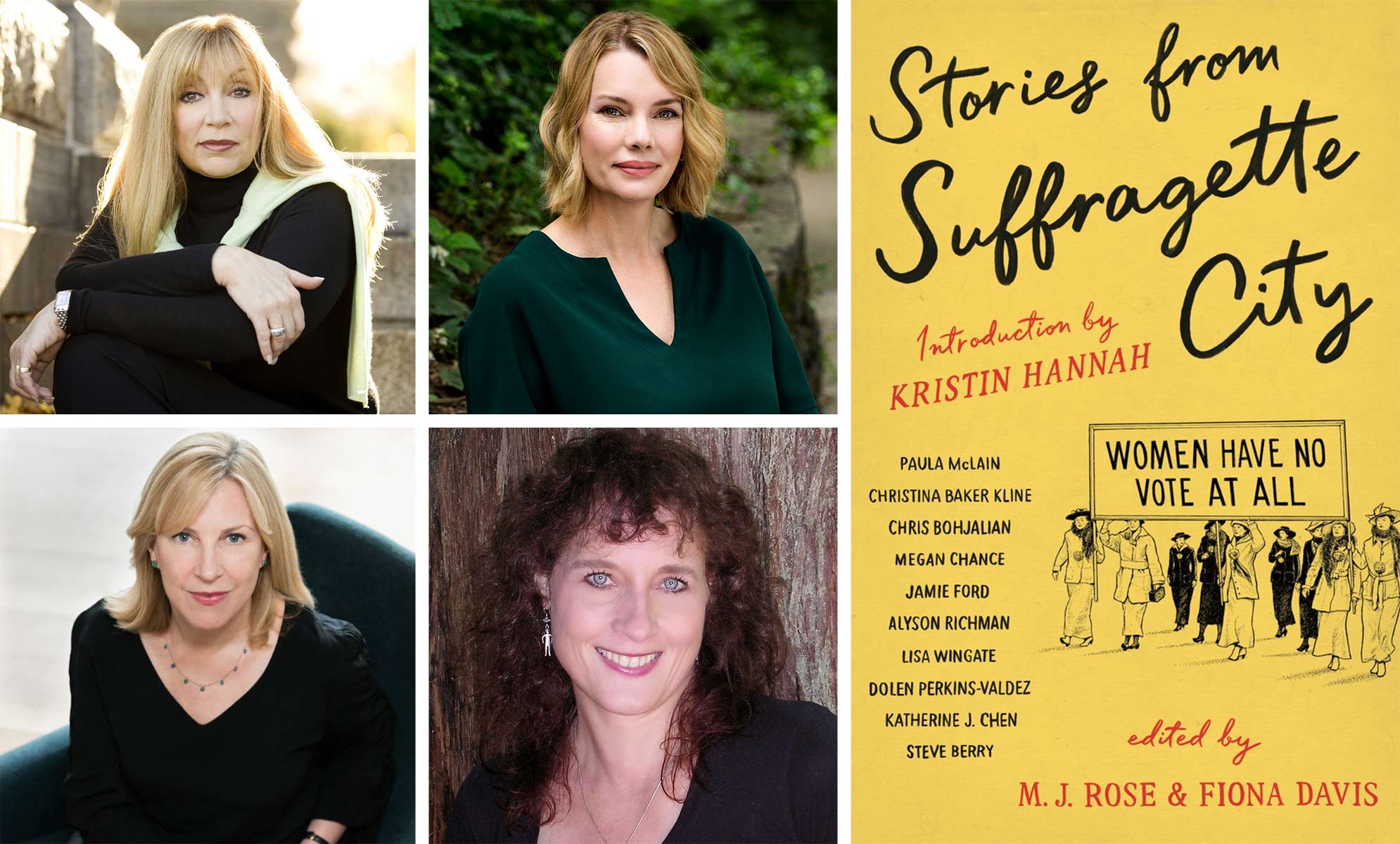 Please join us for a special live streaming event with the editors of the new short story collection Stories From Suffragette City. It's a collection of short stories that all take place on a single day: October 23, 1915, the day when tens of thousands of women marched up Fifth Avenue, demanding the right to vote in New York City. The characters depicted here, some well-known, others unfamiliar, each inspires and reinvigorates the power of democracy. The collection is edited by well known best selling novelists M.J. Rose and Fiona Davis with contributions from 13 authors and an introduction by Kristin Hannah.
CLICK HERE to purchase a copy of the book from Diane's Books. A limited number of copies of the book signed by editors M.J. Rose and Fiona Davis are available.
Joining the editors will be best selling authors Christina Baker Kline and Megan Chance. This event is co-sponsored by The League of Women Voters of Greenwich and will be introduced by Stephen Schmidt from the Greenwich Library. Ms. Rose will moderate the discussion which will touch upon the research and inspiration behind their contributions to the book.

M. J. Rose is a New York Times and USA Today best-selling author of more than 20 novels, including The Book of Lost Fragrances and Cartier’s Hope, more than half of which have appeared on the Indie Next List. The Fox TV series Past Lives was based on M.J.’s novel The Reincarnationist. Her books have been translated into more than 30 languages.

Fiona Davis is the national best-selling author of historical fiction set in iconic New York City buildings, including The Lions of Fifth Avenue (a GMA Pick and NYT Bestseller), The Chelsea Girls, and The Masterpiece. Her books have appeared on the Indie Next List, been LibraryReads Picks and TheSkimm Reads Pick of the Week, and have been translated into more than a dozen languages.

Christina Baker Kline is the #1 New York Times bestselling author of seven novels including Orphan Train, which spent more than two years on the NYT list and was published in 40 countries. Hundreds of communities, schools, and universities have chosen it as a “One Book, One Read” selection. Her recent novel, A Piece of the World, an instant NYT bestseller, was awarded the 2018 New England Prize for Fiction and the 2018 Maine Literary Award.

Megan Chance is the nationally best-selling, critically acclaimed author of several novels. She’s won over 15 awards for her work. Her novel Bone River was an Amazon Book of the Month, The Spiritualist was chosen as one of Borders Original Voices, and An Inconvenient Wife was a Booksense pick. She has been translated into more than a dozen languages.
Read Publisher's Weekly review of Stories From Suffragette City.
Date with an Author and AuthorsLive is made possible through the support of the Greenwich Library Board of Trustees and contributions by generous donors. For more information, please visit greenwichlibrary.org/authorslive.
To get early access to all the Library's AuthorsLive events, sign up here for AuthorsLive email newsletters.