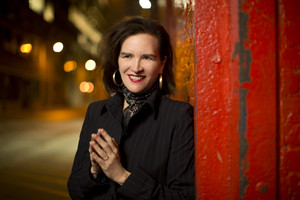 **Registration is required for this event starting March 11. Please note time change- this concert will start at 4 PM.**
From her early days leading a jazz trio in small Chicago nightclubs, Patricia Barber has drawn extravagant accolades. The praise came at first from local writers, impressed by her unique arrangements and coolly composed piano improvisations. As she added vocals to her repertoire, the praise poured in from national reviewers intoxicated by her recordings. And when (after years of international touring) she began to focus on her own compositions, kudos arrived from new fans, besotted by her lapidary lyrics and her often indelible imagery.
Barber wrote (in Poetry Magazine, in 2005): “I am a songwriter, which is not the same thing as a poet. Poetry is a passion, my ever-present guide and inspiration. Though I indulge in very little of the lingua franca of the art. . . . I cannot talk about poetry, but I know poetry. Alone, with logic and diligence, I have studied, but for me, art can be created neither by logic nor diligence. Like music, poetry is created in the mouth, in the ear, and in the air.”
Born in the Chicago suburbs, Barber came by music naturally. Her father was Floyd “Shim” Barber, a saxophonist who had worked with Glenn Miller’s orchestra, and the instrument beguiled young Patricia: “When he played the saxophone around the house, I’d put my hand in the bell to feel the music.” She began playing classical piano at the age of 6, but by the time she had graduated high school – in South Sioux City, Iowa, where the family had moved in the mid-60s, following her father’s death – Barber had foresworn jazz entirely. “It was hanging over my head the whole time,” she recalled years later. “But I thought that becoming a jazz musician was such a stupid thing for a woman to do – for a smart woman to do – that I tried to resist it.”
Barber enrolled at the University of Iowa with a double major in classical music and psychology, while continuing to indulge the voracious reading habit she had nurtured since childhood. But the jazz echoes she thought she’d banished only grew louder, and by graduation, she had decided to follow in her father’s path. She returned to Chicago, and in 1984 she landed the gig that put her (and the venue at which she performed) on the national jazz map: five nights a week at the intimate Gold Star Sardine Bar, which held 60 people at the most, but where the audience made up in sophistication what it lacked in size.
Soon her reputation spread beyond Chicago, spurred by enthusiastic response to performances at the Chicago Jazz Festival (1988) and the North Sea Jazz Festival in the Netherlands (1989), culminating in her major label debut (A Distortion Of Love) in 1992.  Two years later, she released Café Blue, her debut for the small Premonition label; working with label head and producer Michael Friedman, Barber garnered rave reviews from around the nation, which would quickly become the normal response to each new release.
At about the same time, Barber began a steady engagement at Chicago’s legendary Green Mill (which was owned in the 1920s by a lieutenant of Al Capone’s, and is today considered the city’s leading jazz room); when not on tour, she continues to perform there every Monday night. And, ever the student, Barber returned to academia in the mid-90s to earn her master’s degree in jazz pedagogy from Northwestern University. (She regularly gives master classes in this country and overseas.)
Barber’s first two albums for Premonition made her an international star: despite the label’s tiny size, Barber sold more than 120,000 of the album Modern Cool and even more of the follow-up Nightclub, attracting the attention of Blue Note Records. In 1999 Blue Note started distributing her discs as part of a unique partnership – the first joint imprint in the fabled label’s then-six-decade history. In 2002, Barber moved into an exclusive contract with Blue Note, recording three albums, including Mythologies, a genre-crashing song cycle based on the writings of the ancient Roman poet Ovid; the project was supported by a Guggenheim Fellowship in composition (the first ever awarded to a non-classical “songwriter”).
By then, Barber had secured her place in modern jazz history. Among her contemporaries, only Cassandra Wilson had managed to create a comparable chemistry of new and old standards (catalyzed by uncategorizable originals); and only Diana Krall would match the compound appeal of Barber’s rarefied vocals and pristine piano. In recent years, she has released two volumes of music recorded at the Green Mill, available on her own label.
Now with Smash, her January 22, 2013 debut on Concord Jazz, Barber proves that her poetry continues to search ever deeper, even as her music grows all the more magical.
Registration is required for this event starting March 11. Please note time change- this concert will start at 4 PM.
We expect a large crowd for this performance, so please allow plenty of extra time for parking and consider carpooling.
Doors will open at 3:15 PM. Registered patrons must be seated by 3:50 p.m. in order to hold their seat or it will be released to patrons on the event standby line.
If your plans change and you can no longer attend, please email news@greenwichlibrary.org to cancel.