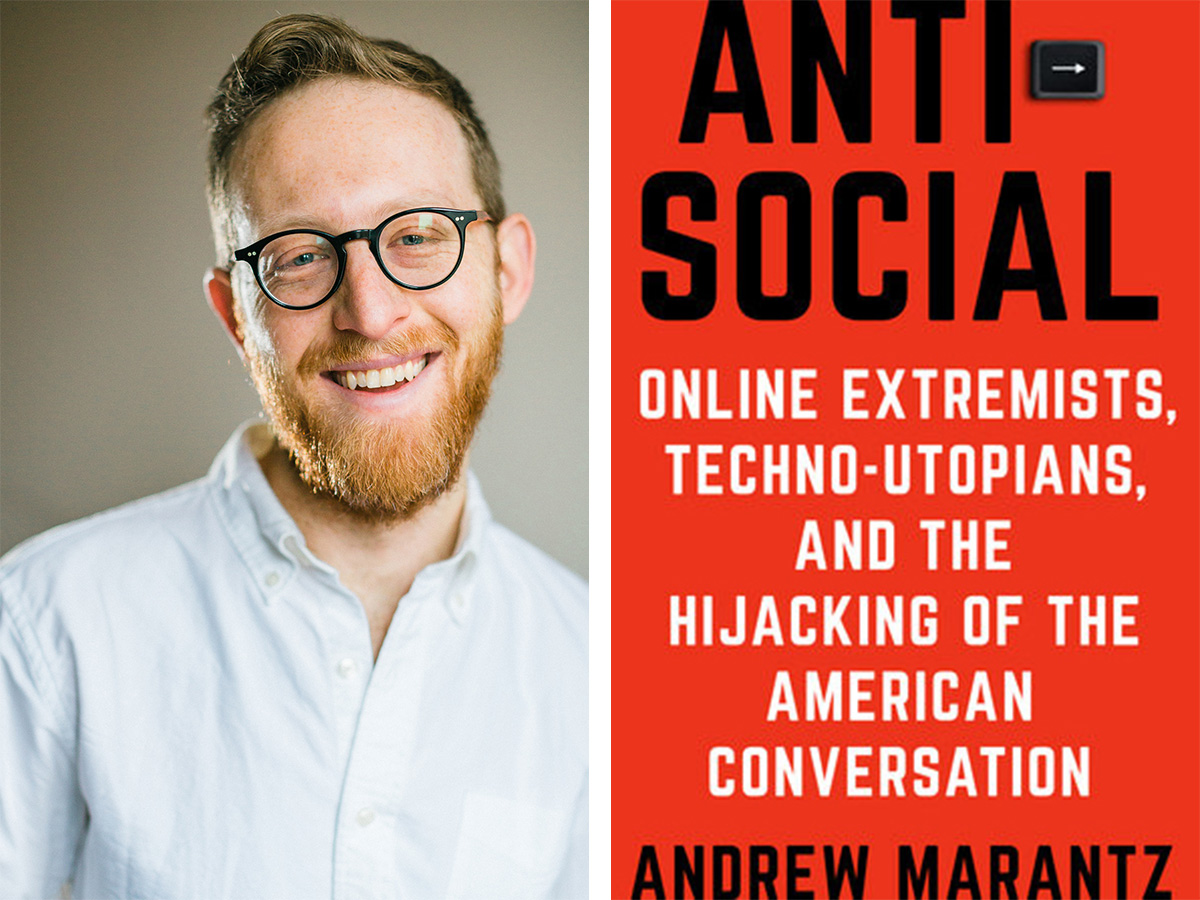 ***STANDING ROOM WILL BE AVAILABLE***
Greenwich native and staff writer at The New Yorker, Andrew Marantz, will discuss his new book Antisocial: Online Extremists, Techno-utopians, and the Hijacking of the American Conversation with Greenwich Time editor, Tom Mellana. Check out the New York Times Book Review!
For several years, Andrew Marantz, a New Yorker staff writer, has been embedded in two worlds. The first is the world of social-media entrepreneurs, who, acting out of naïvete and reckless ambition, upended all traditional means of receiving and transmitting information. The second is the world of the people he calls “the gate crashers”–the conspiracists, white supremacists, and nihilist trolls who have become experts at using social media to advance their corrosive agenda. Antisocial ranges broadly–from the first mass-printed books to the trending hashtags of the present; from secret gatherings of neo-Fascists to the White House press briefing room–and traces how the unthinkable becomes thinkable, and then how it becomes reality. Combining the keen narrative detail of Bill Buford’s Among the Thugs and the sweep of George Packer’s The Unwinding, Antisocial reveals how the boundaries between technology, media, and politics have been erased, resulting in a deeply broken informational landscape–the landscape in which we all now live. Marantz shows how alienated young people are led down the rabbit hole of online radicalization, and how fringe ideas spread–from anonymous corners of social media to cable TV to the President’s Twitter feed. Marantz also sits with the creators of social media as they start to reckon with the forces they’ve unleashed. Will they be able to solve the communication crisis they helped bring about, or are their interventions too little too late?
Tom Mellana is the managing editor of the Stamford Advocate as well as Greenwich Time, part of Hearst Connecticut Media. A longtime Connecticut journalist, Mellana has been managing editor of Greenwich Time since 2013 and served as editorial page editor of both the Advocate and Greenwich Time from 2008 to 2013. Mellana has also previously worked as a news reporter and as the arts editor of the two newspapers.
This event is open to all at no charge. Registration, using the Library's online calendar, highly recommended. Doors of the Flinn Gallery will open at 6:30 p.m. Books will be available for purchase and signing at the event through Diane's Books.
To learn more about Andrew Marantz before he comes to AuthorsLive, check out his interview on NPR's "Fresh Air" with Terry Gross here and read his interview with The New York Times here.
Interested in reading more by Marantz? Check out his article titled "The Virologist," which appeared in The New Yorker. Click here to read now.
Click here for a staff-compiled list of additional recommended reading similar to Antisocial that you might find interesting!
AuthorsLive at Greenwich Library is made possible through the support of the Greenwich Library Board of Trustees and contributions by generous donors. For more information, please visit www.greenwichlibrary.org/authorslive.